1 Is mayonnaise an instrument?

People think this is funny. It’s not. Patrick is only funny once on this episode and it’s not this part.

Mayonnaise Jars can be made into instruments though… Horse Radish sadly cannot however.

A better question is How the HELL will Sandy play the saxophone?

2 It’s called the Ugly Barnacle. Once there was an ugly barnacle. One day he was so ugly everyone died.

It’s called the Canadian Singer. Once there was the canadian singer. One day Justin Bieber was so ugly everyone died THE END.

This is someone’s username on YouTube. I’ve seen a comment by them, but I can’t remember where…

Haha! Me and my son, Bradley always laugh at when he says this! It’s so cute!

This has to be the funniest line of the entire show, no kidding.

This was one of the first SB moments I saw, and I can see why I liked it.

This is not a good quote. This means episodes like stuck in wringer and yours mine and mine were on PURPOSE!

One of the better jokes of the new SpongeBob era! Love it!

I can not believe this part was from tentacle vision

Which episode was that

5 We should take Bikini Bottom, and push it somewhere else!

We should take all the SAO haters and push them off the face of this planet!

We should take the Mexicans, and push them behind the wall! -Donald Trump

We should take Donald Trump and push him to the back of a dumpster truck!

We should take wannabe rock bands and push them somewhere else!

A funny reason to mad.

This is my personal favorite quote from Mr. Star himself

This is the best quote ever I mean

This describes my normal day.

8 East? I thought you said Weast!

This was funny. He pronounced “west” as “weast”.

Not only does he say this in the DoodleBob episode but in The SpongeBob Movie Sponge Out Of Water in the start where SpongeBob and Patrick are blasted into a hole, Patrick pops out and weakly says, “Finland…” LOL!

The best quotes ever

Like, I mean, Patrick is awesome. More awesome than the genius Sandy, most realistic Squidward, money-minded Mr Krabs, even the silly SpongeBob! Because he’s not awesome, in a sense that he’s got absolutely nothing in his brain, which makes him awesome! Patrick is hilarious! SpongeBob just wouldn’t be complete without him!

It’s so random, yet hilarious!

I loved this episode

11 Well maybe it is stupid, but it’s also dumb!

Oh Patrick dumb people are just blissfully unaware of how dumb they really are, right?

His second funniest quote ever, after “No, this is Patrick! “

Oh yeah definitely the funniest it should first

I love this quote I think it’s the funniest

That’s an underrated quote! I love that!

What episode did he say this?

This isn’t that good a quote.

This is better in context

14 Are you Squidward… that’s ok take your time

15 Just do what I do when I have problems…..Scream!

This is how I solve my problems

One of the funniest parts of “The Fry Cook Games.”

17 Who you callin a pinhead? 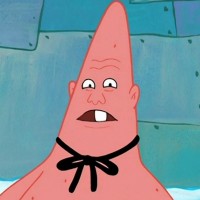 Who you calling pinhead? I know, Justin Bieber.

Allright Pinhead, yer’ time is up!
Who you callin’ pinhead?

18 Could I have everybody’s attention?…I have to use the bathroom

I did this in class once.

20 I can’t even tell the bathrooms apart!

It’s stupid that Chris Columbus got all the credit!

22 Now that we’re men, I changed my underwear.

24 I thought the Corps would help me straighten out my life, sir!

Yes it is your wallet.