THE HIKAYAT: Meaning of Ramadan

Ramadan (spelling KBBI: Ramadan, in Arabic: رمضان) is the ninth month in the lunar Hegira (the Islamic religious calendar systems). Throughout this month, Muslims perform a series of religious activities which includes fasting, prayer tarawih, warning the decline of Al-Quran, seek Laylatul Qadr night, multiply the reading of the Qur’an and then ended it with the payment of Zakat-Fitr and Eid ul-Fitr celebration. Specialty month of Ramadan for Muslims is reflected in the Qur’an in surah Al Baqarah verse 185 which means:

Month of Ramadan, the month in which the Qur’an descended as a guidance for mankind and the explanations about it and distinguishing clues. Therefore, whoever of you is present in that month, he must fast that month …

Ramadan comes from the root word ر م ض, which means intense heat or drought, particularly on the ground. Babylonian who was once a very dominant culture in the northern Arabian peninsula using a luni-solar calendar (counting years based on moon and sun as well). Nine months to fall in the summer is always a very stinging. From morning to evening the mountain rocks and sand deserts scorched by summer sun segatan noon time is longer than night time. On a hot night on the rocks and sand a little bit down, but before the cold really been met with in the morning. Similarly happens repeatedly, so that after several weeks the accumulation of heat scorch. Those days are called the month of Ramadan, the month with heat scorch.

After the Muslims developed based calendar months, which averaged 11 days shorter than the solar-based calendar, Ramadan is no longer always coincide with the summer. People better understand ‘panas’nya Ramadan is metaphoric (figurative). Because in the days of Ramadan fasting person, his throat was hot because of thirst. Or, hopefully with the rites of Ramadan previous sins be destroyed in a fire and after the Ramadan fasting person is no longer sinful. Wallahu `natural.

From the root word is the word used to indicate the existence of Ramadan hot sensation when someone is thirsty. Another opinion says that the word used for the month of Ramadan was abolished by the sins of good deeds as the sun burns the ground. But the word Ramadan means can not be equated with ramadan. Ramadan in Arabic means a sick person going blind eye. Furthermore it dikiaskan with the use of moments of Ramadan by the adherents of Islam that serious to melt, rearrange and renew the physical strength, spiritual and behavior, as it represents something that the heat can melt the material.

Fasting Ramadan
The main article for this section are: Fasting (Islam) 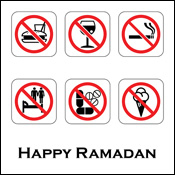 The last day of Ramadan is celebrated with joy by all Muslims in the world. In the evening (night 1 Shawwal), commonly called a victory tonight, they will peal Takbir together. In Indonesia, this ritual became an interesting spectacle because it is usually the population (the Moslems) will carry a Takbir while parading around town and villages, sometimes equipped with drum beating and fireworks.

The next day Shawal 1, which is celebrated as the feast of Eid al-Fitr, both male and female Muslim mosque and the field will be packed into the place was going to do Eid prayer. Prayers will be two rak’ah then be terminated by two sermons on Eid. The celebration then continued with the show give each other Lease between the Muslims, and also end the whole series of special religious activities that accompany Ramadan.
Tarawih Prayers

The main article for this section are: Tarawih

In the evening, precisely after evening prayers, the Islamic religious worship continue to perform tarawih prayers. Special prayer performed only during Ramadan. Tarawih prayers, although they could be implemented with its own, generally performed in congregation at mosques. Sometimes before the implementation of appropriate tarawih prayers at certain points, held a short lecture to provide the jama’a the pilgrimage in the month.

Zakat tithe is specifically issued during Ramadan or at the latest before the completion of the Eid prayer. Each individual Muslim is obliged to pay zakat capable of this kind. The amount of tithe to be paid per individual is the one sha ‘staple food in the area concerned. This number when converted approximately equivalent to 2.5 kilograms or 3.5 liters of rice. Recipients of Zakah is generally determined in 8 groups (poor, poor, Amil, converts, bondsmen, gharimin, Fisabilillah, ibn sabil) but according to some scholars specifically for tithe must come first to the first two groups, ie, indigent and poor. This opinion was based on the grounds that a very small amount of zakat while one of his goals is to tithe the issuance of the indigent and the poor can contribute to celebrating the holiday.

Important events that occurred during Ramadan

1. Battle of Badr: 17th Ramadan 2 AH – It is the first battle by the Muslims after their migration (hijra) to

Medina against the Quraish of Mecca. The battle ended with the victory of the Muslims in lieu of 313 men

against about 1000 people of Mecca.
2. The murder of Ali bin Abi Talib: 21 Ramadan 40 H: the fourth and final first four caliphs, was murdered by

a named Abdurrahman bin Khawarij Muljam. He died on 23 Ramadan that year. Her death marked the

end of the Islamic Caliphate system, and then starting with the dynasty system.