The Gifts of Yeshua at Yom Kippur 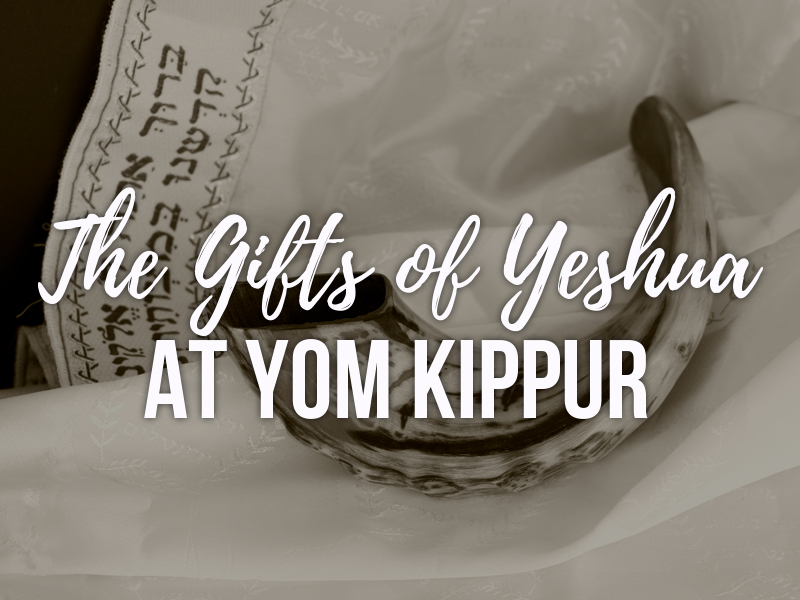 Jewish tradition teaches that every Rosh Hashanah (rosh ha-SHAH-nah), the Lord pronounces judgment for the coming year for each person’s life. Ten days later, on Yom Kippur (yom kih-POUR), tradition holds that He seals the judgment.

The days between Rosh Hashanah and Yom Kippur, known as the Days of Awe, are a time of reflection in which Jewish people focus on repentance, giving to charity and pursuing reconciliation with God and man. They do so in hope of securing a favorable judgment from the Lord for the year to come and being inscribed in the Book of Life.

Yom Kippur literally means “Day of Atonement.” It is the holiest day of the Jewish year, accompanied by fasting, extensive prayer and introspection. Services in the synagogue focus on the recitation and proclamation of the numerous passages in the Hebrew Scriptures that declare the Lord will forgive the sins of the people of Israel. These Scriptural declarations are believed to serve as substitution for the sacrifices that can longer be made in the absence of the Temple in Jerusalem.

Messianic Jews around the world often join with the broader Jewish community in the observances of Yom Kippur. As we do, we reflect on the gifts of Yeshua that add to our commemoration of this most holy day on the biblical calendar.

The Gifts of Confession, Forgiveness and Salvation

One of the main prayers in the synagogue on Yom Kippur is the confession of an extensive and specific list of 44 sins codified in the prayer referred to as the Al Chet (meaning, “for the sin”). This prayer is based on the confession of “all the iniquities of the children of Israel” that the High Priest was instructed to make over the scapegoat (Leviticus 16:21-22).

This specific list is believed to have been handed down through the centuries from Moses and Aaron and recorded by the sages and rabbis of Israel. Often times, the person reciting the prayer strikes his chest with the naming of each specific sin. This is a sign of grief over having committed that sin. This confession, along with teshuva (teh-SHOO-vah), which means repentance, is believed to grant forgiveness for the penitent of heart.

As Messianic Jews, those who declare Yeshua as the promised Messiah of Israel, we join this prayer with great confidence that our confession of sin leads to forgiveness, and our confession of Him as Messiah also assures us of salvation!

“If we confess our sins, He is faithful and righteous to forgive our sins and purify us from all unrighteousness” (1 John 1:9).

“For if you confess with your mouth that Yeshua is Lord, and believe in your heart that God raised Him from the dead, you will be saved” (Romans 10:9).

We often add to our Yom Kippur petitions the plea that our people would share in the assurance of the forgiveness of sin and the salvation that can only be found in Yeshua.

The Gift of Redemption from Sin

The word “atone” means to “cover.” When we seek atonement for sin before the Lord, we are asking that He would cover our sins. The Torah-prescribed practices of Yom Kippur are the means by which the Lord said He would cover the sins of the children of Israel year after year. The writer of Hebrews affirms that the blood of goats and bulls has power to cleanse us.

“For if the blood of goats and bulls, and the sprinkling of defiled persons with the ashes of a heifer, sanctify for the purification of the flesh” (Hebrews 9:13 ESV).

While affirming that power, Hebrews also identifies the limits to the power of the blood of animal sacrifices, saying that it cannot take sin away.

“…for it is impossible for the blood of bulls and goats to take away sins” (Hebrews 10:4).

“Indeed, every [priest] stands day by day serving and offering the same sacrifices again and again, which can never take away sins” (Hebrews 10:11).

Speaking of Yeshua’s sacrifice, the writer of Hebrews states:

“He entered into the Holies once for all—not by the blood of goats and calves but by His own blood, having obtained eternal redemption” (Hebrews 9:12).

“…He is the mediator of a new covenant, in order that those called may receive the promised eternal inheritance – since a death has taken place that redeems them from violations under the first covenant” (Hebrews 9:15).

As Messianic Jews join other Jewish people around the world to commemorate Yom Kippur, we call on the Lord to make atonement for our sin, and, while we ask Him to cover it, we also have great confidence in Yeshua’s sacrifice to have redeemed us from sin, that is, to take it away completely. How much more there is for us in Messiah’s blood in the Heavenly Holy of Holies! Not just a covering of our sin, but redemption from it historically, today and eternally. Oh, that our people, Israel, would join us in the redemption from sin found in Yeshua!

The practices of Yom Kippur are observed with the goal of having one’s name written in the Book of Life. Moses, David, Daniel and Malachi all refer to books where people’s names are written. Moses and the Lord indicate that those whose sins are forgiven are written there (Exodus 32:32-33). David refers to it as the “Book of the Living” where the righteous are written (Psalm 69:28). Daniel states that those from the people of Israel who are written in this book will be delivered at the time of the end (Daniel 12:1). Malachi refers to those remembered for fearing the Lord and meditating on His Name being written there (Malachi 3:16).

From these biblical expectations – forgiveness of sins, indication of righteousness, deliverance and remembrance – Jewish people seek the Lord through prayer and Scripture recitation at Yom Kippur, asking Him to write them in the Book of Life.

Discover  How to Plan a Bridal Shower on a Budget

“…written from the foundation of the world in the Book of Life of the Lamb who was slain” (Revelation 13:8).

“But there shall by no means enter [New Jerusalem] anything that defiles, or causes an abomination or a lie, but only those who are written in the Lamb’s Book of Life” (Revelation 21:27, NKJV).

Who is this Lamb? He is the Lion of the Tribe of Judah, the Root of David (Revelation 5:5). He is the one redeemed us to God by His blood (Revelation 5:9); he is the One to whom blessing, honor, glory and power are due, the One who sits on the Throne (Revelation 5:13).

Yeshua owns the Book of Life. And He is the One who secures those written there.

Oh Yeshua, make Yourself known to our people Israel! May this year be the year that they call on You and are inscribed in the Lamb’s Book of Life!

These Gifts are Available to All

In recounting the gifts of Yeshua in the practices of Yom Kippur for Messianic Jewish people, it is important to know that these gifts are freely available to all who will call upon Him.

“For the Scripture says, ‘Whoever trusts in Him will not be put to shame.’ For there is no distinction between Jew and Greek, for the same Lord is Lord of all – richly generous to all who call on Him. For ‘Everyone who calls upon the name of Adonai shall be saved’” (Romans 10:11-13).

The traditions of Yom Kippur, derived from the Scriptures, point us to the redemption in the blood of Yeshua shed once for all. Anyone who follows Him, Jew or Gentile, can walk in the gifts He has given us. Those gifts are commemorated by the holy day of Yom Kippur.