The following is a very interesting note about History of Easter

Welcome to the history of Easter page. Know about the roots of Easter, the Lent and the Holy week. Scroll down, and unravel the history.

Come March. And the world around you gets geared up to go ga ga on a
festive spree. Some skeptics might shrug off the March madness fray, but
can’t beat the freak it rolls out of its season of rejuvenation, rejoice
and renewal that ushers in with a basketful of new promises and gifts in 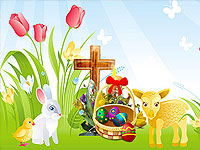 galore. The nature discards its weary look to don a brand new outfit.
The shining sun showers its blissful warmth, as if, to thwart the
frosted blanket which the winter wraps around us. The brook turns
bubbly. The blooming tulips, the crocuses and the daffodils – all swayed
by the cool southie breeze, bring back the vibe on earth.

What else can be a better day for fun and fiesta? To have your family
reunited? Friendship and love renewed? And feelings shared?
Perhaps all these traits have made spring and celebrations almost
synonymous. That too from the dawn of human history.

Even in the Greek mythology, Demeter and Persephone, convey the idea of
a goddess returning seasonally from the nether regions to the light of
the day. This is in conjunction with the vernal equinox, March 21, when
nature is in resurrection after the winter.
Even Easter – the grand occasion that reminds you of the golden and
crimson eggs and chocolate bunnies, the ho’cross buns, is also a spring
time festival. As if the Almighty had chosen this glorious season for
the death-resurrection and exaltation of Jesus Christ, the son of God.

Easter, the principal festival of the Christian church year,
celebrates the Resurrection of Jesus Christ on the third day after his
Crucifixion. The origins of Easter date to the beginnings of
Christianity, and it is probably the oldest Christian observance after
the Sabbath (observed on Saturday). Later,
the Sabbath subsequently came to be regarded as the weekly celebration
of the Resurrection.

Meanwhile, many of the cultural historians find, in the celebration of
Easter, a convergence of the three traditions – Pagan,
Hebrew and Christian.

According to St. Bede, an English historian of the early 8th century,
Easter owes its origin to the old Teutonic mythology. It was derived
from the name Eostre, the Anglo-Saxon goddess of spring, to whom the
month of April was dedicated. The festival of Eostre was celebrated at
the vernal equinox, when the day and night gets an equal share of the
day.

But it is pointed out by some that the Easter festival, as celebrated today, is
related with
the Hebrew tradition, the Jewish Passover. This is being celebrated
during Nisan, the first month of the Hebrew lunar year.
The Jewish Passover under Moses commemorates Israel’s deliverance from
about 300 years of bondage in Egypt. 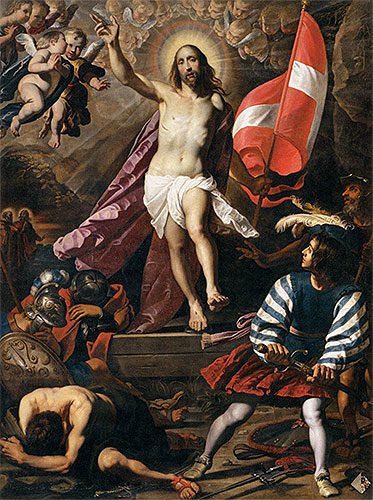 It was in during this Passover in 30 AD
Christ was crucified under the order of the Roman governor Pontius
Pilate as the then Jewish high priests accused Jesus of
“blasphemy”. The
resurrection came three days later, on the Easter Sunday. The early
Christians, many of them being brought up in Jewish tradition regarded
Easter as a new feature of the Pascha (Passover). It was observed in
memory of the
advent of the Messiah, as foretold by the prophets. And it is equanimous with
the proclamation of the resurrection. Thus the early Christian Passover turned out to be
a unitive celebration in memory of the passion-death-resurrection of Jesus.
However, by the 4th century, Good Friday came
to be observed as a separate occasion. And the Pascha Sunday had been
devoted exclusively to the honor of the glorious resurrection.

Throughout the Christendom the Sunday of Pascha had become a holiday to
honor Christ. At the same time many of the pagan spring rites came to be
a part of its celebration. May be it was the increasing number of new
converts who could not totally break free of the influence of pagan
culture of their forefathers.

But despite all the influence there was an important shift in the
spirit. No more glorification of the physical return of the Sun God.
Instead the emphasis was shifted to the Sun of Righteousness who had won
banishing the horrors of death for ever.

The Feast of Easter was well established by the second century. But
there had been dispute over the exact date of the Easter observance
between the Eastern and Western Churches. The East wanted to
have it on a weekday because early Christians observed Passover every
year on the 14th of Nisan, the month based on the lunar calendar. But, the West wanted that Easter should always be a Sunday
regardless of the date.

Discover  It's Christmas (All over the World) - New Edition | Song Info

To solve this problem the emperor Constantine called the Council of Nicaea in
325. The question of the date of Easter was one of its main concerns. The
council decided that Easter should fall on Sunday following the first full moon
after the vernal equinox. But fixing up the date of the Equinox was still a
problem. The Alexandrians, noted for their rich knowledge in astronomical
calculations were given the task. And March 21 was made out to be the perfect
date for spring equinox.

The dating of Easter today follows the same. Accordingly, churches in the West observe it on the first day of the full moon that
occurs on or following the Spring equinox on March 21., it became a
movable feast between March 21 and April 25.

Still some churches in the East observe Easter according to the date of
the Passover festival.
The preparation takes off as early as on the Ash Wednesday from which
the period of penitence in the Lent begins. The Lent and the Holy
week end on the Easter Sunday, the day of resurrection.

Easter has been frequently attacked as being a Pagan festival, celebrated by Christians.
There are some factors, which has brought up this claim:

1> The Name ‘Easter’
2> A comment by the Venerable Bede (673-735), an English monk who wrote the first history of Christianity in England

A detailed analysis in this regard, establishing the Christinity of the festival, has been done by ChristianHistory.net.

Anyone who wants to know about them are suggested to visit there page at
by clicking here http://www.christianitytoday.com/ch/bytopic/holidays/easterborrowedholiday.html