This page is a mini sitemap for Will and Guy’ Christmas Jokes and Humour.  Enjoy our jokes, riddles, videos and funny Christmas pictures for the festive season. 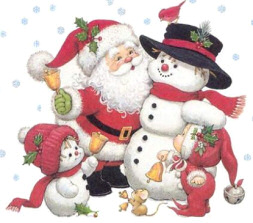 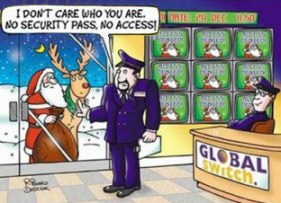 ‘Doctor, doctor, I keep thinking I’m a Christmas bell.’
‘Take these pills and if they don’t work, give me a ring.’ 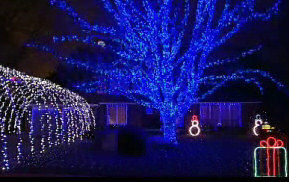 When you consider Christmas, there are four stages in your life:-

1)  You believe in Santa

Santa Claus, the Tooth Fairy and an Honest Lawyer

Santa Claus, the tooth fairy, an honest lawyer and an old drunk are walking down the street together when they simultaneously spot a hundred dollar bill. Who gets it? The old drunk, of course, the other three are mythological creatures. 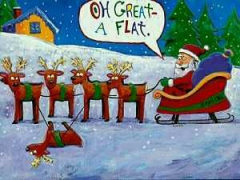 Santa Claus’ sledge broke down on Christmas Eve. He flagged down a passing motorist and asked, ‘Can you help me fix my sledge, please?’

What did the reindeer say before launching into his comedy routine?
This will sleigh you. Q. What’s Christmas called in England?
A. Yule Britannia! (English Christmas Humour!)

The boy who was playing the Inn Keeper was fed up of his insignificant role, so when Joseph knocked and asked if there was any room in the inn.  Instead of saying ‘No’ as he was supposed to, the young prima donna said, ‘Come in Joseph and Mary, there is plenty of room in my inn.’

How They Forecast a Cold Winter

One day in early September the chief of a Native American tribe was asked by his tribal elders if the winter of 2010/11 was going to be cold
or mild.  The chief asked his medicine man, but he too had lost touch with the reading signs from the natural world around the Great
Lakes. In truth, neither of them had idea about how to predict the coming winter.  However, the chief decided to take a modern approach, and
the chief rang the National Weather Service in Gaylord Michigan.

‘Yes, it is going to be a cold winter,’ the meteorological officer told the chief.  Consequently, he went back to his tribe and told
the men to collect plenty of firewood. A fortnight later the chief called the Weather Service and asked for an update. ‘Are you still forecasting a cold winter?’ he asked. ‘Yes, very cold’, the weather officer told him. As a result of this brief conversation the chief went back to the tribe and told his people to collect every bit of wood they could find. A month later the chief called the National Weather Service once more and asked about the coming winter. ‘Yes,’ he was told, ‘it is going to
be one of the coldest winters ever.’ ‘How can you be so sure?’ the chief asked. The weatherman replied: ‘Because the Native Americans of the Great Lakes are collecting wood like crazy.’ 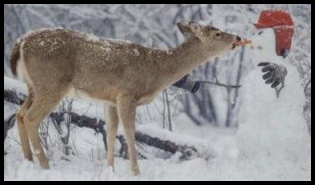 Don’t Try This at Home!

Pastor Tony is walking down the street on Christmas eve when he notices a Larry, a small boy, trying to press the doorbell of a
house across the street.  However, Larry is very small and the doorbell is too high for him to reach. After watching the boy’s
efforts for some time, Pastor Tony moves closer to Larry’s position. He steps smartly across the street, walks up behind the little fellow
and, placing his hand kindly on the child’s shoulder, leans over and gives the doorbell a solid ring. Crouching down to Larry’s level, Pastor Tony smiles benevolently and asks, ‘And now what, my little man?’ To which Larry replies with a beaming grin, ‘Now we run!’ 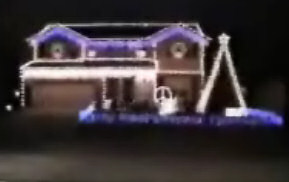 Christmas 1940 – A Christmas Under German Blitz Following the phoney war of 1939, Britain suffered directly and indirectly from German bombing. Most seriously over 24,000 innocent civilians had been killed in the Blitz not only in London but also in Coventry, Manchester and Liverpool. Christmas trees were not a high priority for townspeople because they spent so much time in their air-raid shelters, which were too cramped for a modern sized Christmas tree. Effects of Rationing For a typical war time Christmas we would consider the typical Christmas fayre a joke, except it was not funny in 1940 due to rationing.  For example a family’s meat ration would not cover a small chicken.  Country people had it better, provided they planned ahead and reared their own chicken, or failing that a rabbit or two.  One reason that those who survived the war were so healthy was thank to ‘dig for victory’ whereby people planted every available space with healthy vegetables. The government also gave extra sugar rations for the Women’s Institutes to convert autumn fruits into jams and other preserves.  As for all
those goodies that Britain now imports from Europe, French cheese, Spanish wine – forget it – the German U-Boat blockade in 1940 meant no luxuries.

How to Say “Merry Christmas” in 75 Other Languages

Footnote: Please write to Will and Guy if you have any good examples of  Christmas Humour.