As in many countries throughout the world, Christmas and its celebrations are a favourite time of the year in Wales, and there are many traditions connected with it.

Before Christmas the tradition was to decorate homes with fresh mistletoe and holly; mistletoe to protect the home from evil and holly as a symbol of eternal life.

The custom in many parts of Wales was to attend a very early church service known as “Plygain” (daybreak), between 3am. and 6am. Men gathered in rural churches to sing, mainly unaccompanied, three or four part harmony carols in a service that went on for three hours or so. The custom managed to survive in many country areas, and because of its simplicity and beauty is being revived in many others. After the service, a day of feasting and drinking would begin.

The day after Christmas Day was celebrated in a way unique to Wales and included the tradition of “holly-beating” or “holming.” Young men and boys would beat the unprotected arms of young females with holly branches until they bled. In some areas it was the legs that were beaten. In others, it was the custom for the last person to get out of bed in the morning to be beaten with sprigs of holly. These customs died out before the end of the 19th century (luckily for young girls and those who like a lie-in!) 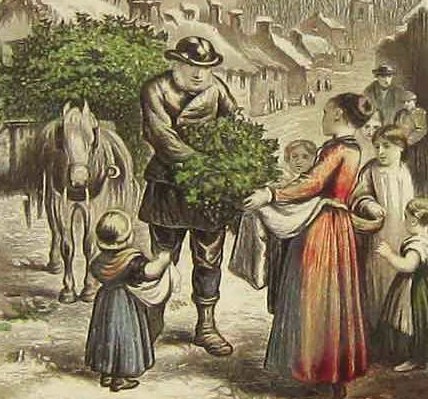 In England in many places it still is the custom that a dark haired man should let in the New Year for good luck. The man leaves the house by the back door just before midnight on New Years Eve, walks around and on the strike of midnight, knocks on the front door. The householder opens the door, and receives from the man the following gifts: salt for seasoning, silver for wealth, coal for warmth, a match for kindling and bread for sustenance.

Some other Welsh customs associated with the New Year were: “all existing debts were to be paid”; never lend anything to anyone on New Years Day else you would have bad luck; and the behaviour of an individual on this day was an indication of how they would behave all year!

A pre-Christian custom associated with the end of the Christmas season, formerly carried out in all parts of Wales but now almost disappeared, is that of the Mari Lwyd ( Grey Mare). It can however still be seen at Llangynwyd near Maesteg every New Years Day.

A horse’s skull with false ears and eyes attached, along with reins and bells, covered with a white sheet and colourfully decorated with ribbons, is carried around on a pole. The Mari Lwyd is carried from door to door and is accompanied by a party of people. At each door, poems are recited in Welsh. Those inside the house reply also in verse refusing to let the Mari Lwyd in until this battle of verse and insults (or pwnco) is won.

The Mari Lwyd parties gained a bad reputation for for drunkenness and vandalism as they roamed the villages. This was unacceptable behaviour especially with the rise of the Chapel and Methodism in Wales, and so the custom was changed. Christmas carols were sung at the doors and the battle of insults and verse disappeared. In some areas the Welsh language gave way to English. By the 1960’s the custom of the Mari had almost died out.

This ancient custom is being revived in many areas where it had formerly died out, as in Llangynwyd near Maesteg. It is also being revived by students at the University of Wales through the streets of Aberystwyth, although with not too much emphasis on the old tradition of drunkenness and vandalism we trust!

The most popular New Year’s custom was one that was carried out in all parts of Wales: the Calennig (small gift). On January 1st from dawn until noon, groups of young boys would visit all the houses in the village carrying evergreen twigs and a cup of cold water drawn from the local well. The boys would then use the twigs to splash people with water. In return, they would receive the Calennig, usually in the form of copper coins. The custom, in various forms, survived in some areas well after World War II, at least in the form of the chanting of a small verse or two in exchange for small coins.